In Sankofa, the Ethiopian filmmaker Haile Gerima gives a new perspective on the history of Africans in the Americas. Inspired by the Haitian Revolution which had Toussant Louverture as its main leader, Gerima’s narrative utilizes African religion and spirituality to empower and unite people. Sango, Gerima’s character who initiates the revolution, is named after one of the most important deities in African religions practiced in the Americas, Candomblé, and Santería. Thus Sango, a Yoruba’s deity, the orisa of fire and justice, nurtures those who pursue their freedom.

Sankofa is an Adinkra motif, an Akan symbol which means the search for a lost heritage. The symbol represents the image of a bird looking in the opposite direction which means that one should recover the past. It emphasizes the notion that to look at the future, it is necessary to revolve the past because without knowing one’s past, one cannot move into the future. Revolving the past implies an exercise of memory and forgetfulness because sometimes a hurtful past resists being recovered. Amnesia is part and parcel of the lives of an individual or a group of people who have gone through traumatic experiences. Therefore, the symbol brings the image of the bird turning its head back means: Return and fetch it! It is no taboo to return and fetch what you have forgotten. Learn from your past.

In this sense, historical events involving the Middle Passage and the Slave Trade become part of the Diaspora’s traumatic past which leads to a collective effort to blur this section of history. Through his film Gerima means to intervene in the past, changing the present and future perceptions about the Slave Trade History, thus opening up new spaces for identities’ negotiation, making a contribution to Slave Trade Historiography. 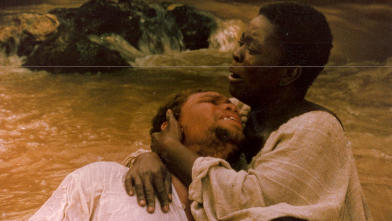 Sankofa tells the story of Mona, an African American fashion model who is making a photo-shoot at the Elmina castle in Ghana. Mona does not know the history involving the castle as a warehouse for trading people to the Americas. Through a metaphysical experience, Mona is transported to a plantation, some centuries before, assuming another identity. In the plantation, she is Shola, a woman who is abused in the plantation. At the end of the movie, Shola comes back to modern Ghana, assuming her identity as Mona but with an awareness about her African ancestry, her religion and the role of spirituality for African people.

It is worth noting that Haile Gerima reiterates Pan-Africanist ideals of solidarity among all people of African descent which brings to the narrative a deja vu tone, a nationalist flavor. Here, we should consider that national narratives have generally misinterpreted women’s experiences. Perhaps, it is the case of Sankofa’s protagonist, Mona, an African American who needs to reconnect with her ancestry while her female body is exposed to blatant violence.